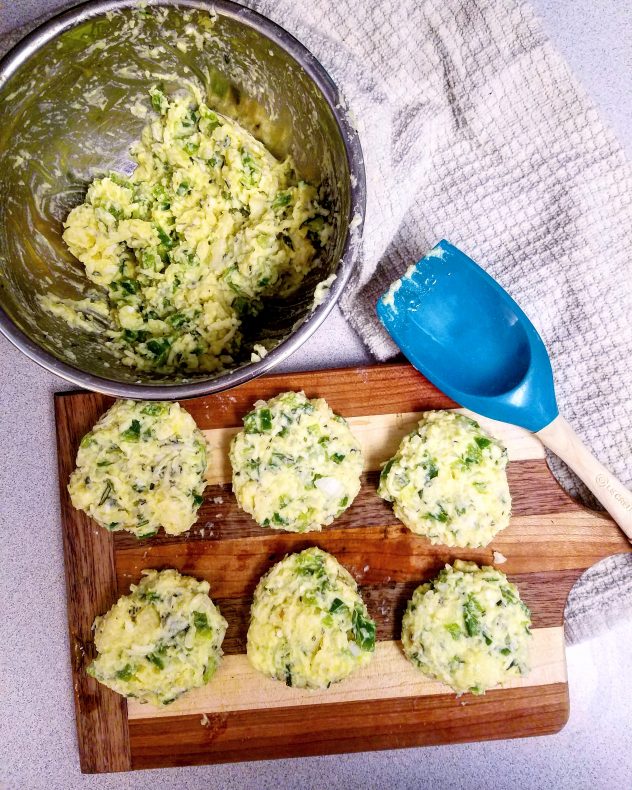 Have you ever had a week that you’re looking forward to? Not vacations, just an ordinary week, but what’s on the planner excites you. I’m having one of those weeks, and it’s thanks to the fact that I’m watching my sister’s husky, Korra (follow her on Instagram!) Returning from Thanksgiving is much easier because I’ve been looking forward to it. When Emily dropped her off, we talked about Thanksgiving and our leftovers. She mentioned she made her mashed potatoes into pancakes. Ding! Thank you Emily, idea for tonight’s dinner! Also, thank you Thanksgiving leftovers.

I read recipe forum posts and for many people mashed potato pancakes are a day after Thanksgiving staple. They are fantastic because you can pretty much add anything to them and they’ll taste great.

First, preheat your skillet on low while you prep the ingredients. I already had leftover onions, finely diced, so I grabbed a green pepper and did the same to it. Throw all the ingredients into a bowl and mix – and get into it, use your hands! Scramble one egg and add that to the mixture, along with flour. I’m not gonna lie, I did not use enough flour at first. They were so terribly hard to flip and basically turned mushy. Whoops, not enough flour.

Ugh, okay start over real fast. I swiftly snatched those potato lumps out of the pan and sent them back to the bowl. I just needed more flour, then they shaped perfectly. Add oil to the preheated skillet and you’re good to go.

As the patties cooked, I simmered the last of the gravy in a small saucepan and started dishing out the turkey portions. I planned to reheat the turkey in the same pan as the potatoes so any lost veggies would be swept up.

Once again I must say thank you Thanksgiving leftovers, because I used my first ever Thanksgiving turkey’s carcass to make a delicious stock, which I used tonight to flavor the turkey and stuffing I reheated. Instead of heating my pan with oil or butter, then adding the turkey, I used a bit of stock.

Bring the turkey, stuffing, and stock to a solid simmer and season with sea salt and poultry seasoning. Put a lid halfway on and let it warm.

When everything is done, plate with the potato patty on bottom topped with the turkey and stuffing mixture. Spoon on gravy and diggg in! 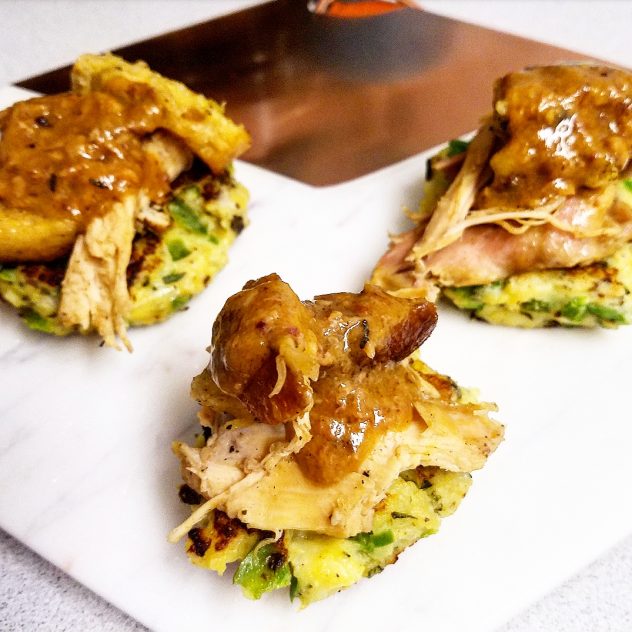