I’ve been traveling a lot this summer. I only spent about two weeks in D.C . in July alone. Between visiting home and getting in my beloved beach time, it’s been busy. One of the last trips I took was down to the Outer Banks with Troy, my dad, my sister, and her fiance (Irakli). Life is funny; as much as I love being on my own, it’s amazing how I occasionally get a pang of missing uninterrupted time with my parents.

Of course, we tried some fantastic restaurants! Beach towns filled with various seafood restaurants is like Christmas to me. Believe me, I have a lot of Yelp reviews to catch up on. One that I couldn’t wait to finish wasn’t actually even in the Outer Banks. We hit this place on our way home as one last meal together before parting. I wanted it to be near water, and since we were planning on an early start, I looked for places about an hour or two into our trip. I ended up picking the Riverwalk Restaurant, which is a fantastic place to stop! 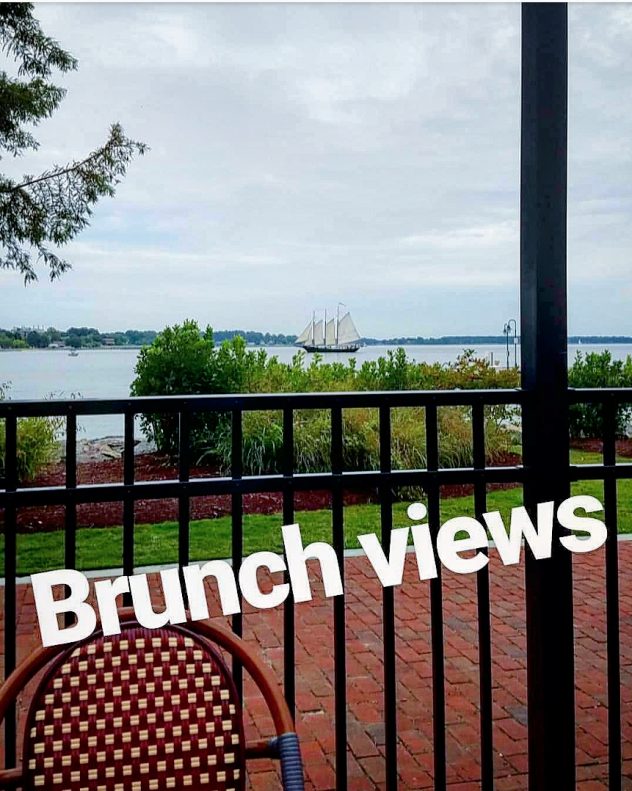 We arrived on an overcast Sunday around noon and, despite the weather, we thoroughly enjoyed sitting out on the patio. We had a great view of the old ships cruising below the bridge. My sister brought her 6 month old Husky puppy with us, so I was a little worried about whether or not they allowed dogs. It’s a tad confusing, because it says they do online, but when you call they say they only allow service dogs. We decided to give it a shot and our waitress was super chill about it. So…I guess the verdict is that they allow dogs?

The waitress made enough friendly conversation to show her personality (she showed us a picture of her adorable Husky mix) without intruding on our meal. While I definitely enjoy engaging conversations with the people who are waiting on me, I can’t stand it when they stay a little longer than comfortable. I got the impression that overall, the staff is very friendly and people like to work here.

Their Sunday brunch menu features a 20oz Bloody Mary, garnished with celery, olives, and a piece of shrimp. I didn’t think I would be able to finish it, but even though it’s a gigantic drink, it wasn’t too strong. It’s a fun addition to a great brunch menu, especially if you’re in the mood to celebrate.

We started with the Grilled Brie Cheese and the Calamari which were so delicious that I’m craving them right now while writing this. The calamari is a beautiful plate. The lightly fried pieces are garnished with arugula, tomatoes, and “octopus salami” (just thinly sliced octopus). The chili aioli wasn’t spicy at all and the salad was so good that the entire table polished it off. The brie was perfect! I loved the apricot jam with it; a few days before I had brie that was served with a darker jelly, and it was good but I much prefer apricot.

These entrees are insane. The way they are packed with flavor certainly make them taste like a 5 star meal. My dad and Irakli ordered their fish blackened – definitely the best choice. It came out tender with a fantastic charred, smokey flavor. Emily had the tacos, with grilled Mahi-Mahi, olive salsa, avocado, and a Sriracha-lime crema.

The King of Clubs sandwich didn’t thrill me, but Troy thought it was delicious. It’s his meal, so I guess that’s all that matters! Random note, I thought it was a little bizarre the way they plated the sandwich. I would have had the interiors of both slices facing each other, otherwise it looks backwards. If you’re looking for a diner-style club sandwich, order this. I convinced him not to ask for the avocado ranch dressing on the side (he’s one of those people we should shun because he thinks he doesn’t like avocados) and thank goodness because he loved it. I think that’s the only saving grace for that sandwich, but like I said, Troy found it to be awesome.

We also received complimentary cinnamon sugar brunch donuts which tasted like they could’ve been your grandmother’s secret homemade recipe.

I had the Benedict Arnold which came with huge crabcakes and perfectly poached eggs! The menu described it as “poached eggs and colossal lump crabcakes atop a fresh biscuit, prosciutto, sauteed spinach, slow roasted tomatoes and Old Bay Hollandaise sauce.” The biscuit was fluffy, thick, and the ideal sponge to soak up the Hollandaise sauce. On paper, the prosciutto sounded amazing, but I’m not sure how successful it was. I sat underneath the crabcake, but I think if it was toward the top, closer to the egg, then it would blend better.

If you’re touring nearby and in search of an upscale meal yet casual atmosphere, stop by Riverwalk Restaurant!

Check out my original review on Yelp!