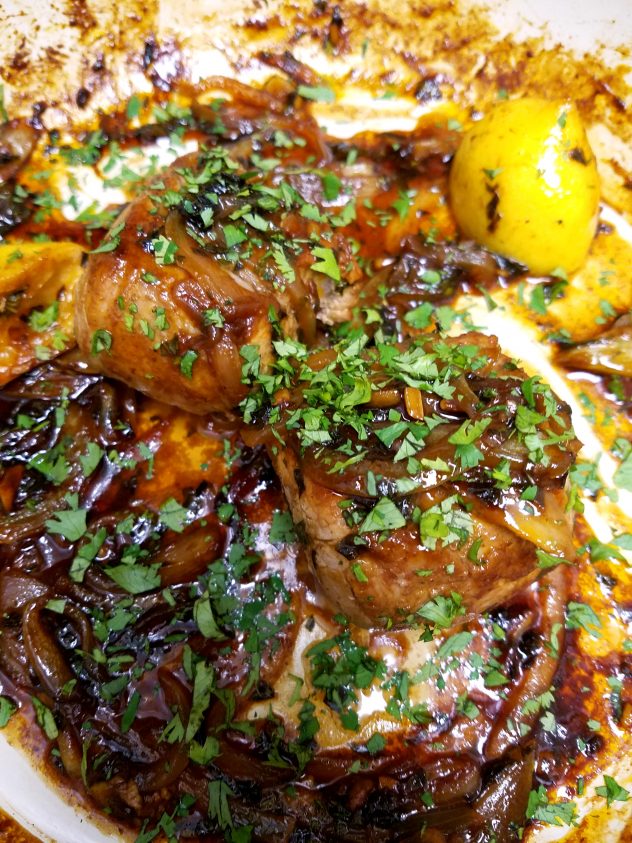 When I was younger, I never used to like spicy flavors. I simply could not handle the searing heat on my tongue and my eyes would start watering immediately. Since I moved to college and started cooking on my own, I’ve grown to love a little spice! I finally understand the attraction of feeling the burn, but appreciating the flavor, too. I’ve learned – the hard way – just how much it makes a difference to add the seeds of a pepper into a dish.

For some reason, I had a craving for mashed potatoes one day, so I decided to incorporate those into dinner. A lot of times I’ll come up with dinner ideas thanks to a random side dish craving. To me, it’s easy to pick a protein that I want to work with, what I wrack my brain over is developing interesting side dishes. I knew I didn’t want them to be plain old traditional potatoes, so I tried to think of what else to add. Of course! Perfect opportunity to work on adding spicy flavors. Thankfully, I had pork tenderloin in the fridge, thawed and ready to go.

Create the pork tenderloin marinade by mixing Worcester sauce, Dijon mustard, horseradish, and flavored olive oil. Season with salt and pepper, and marinate for at least 20 minutes. I’m trying to get in a better habit of marinating my meat about an hour before I begin cooking. I’m all about letting the flavors really soak and fuse together, and a minimum of 20 minutes helps. At the least, always prioritize your marinade by working on it first thing.

I started by preheating the oven to 425◦ and getting my potatoes on to boil. I sliced a fairly large onion in half and finely diced the larger of the two pieces. If you’d like, save the smaller half for slicing and cooking with the pork. Finely dice the jalapeño, including as many seeds as your heat tolerance can stand. Since my plan was to mix both the onion and jalapeño in with the mashed potatoes, I turned up the heat a little and added a fair amount of seeds. Use a small skillet to saute first the onion and second the jalapeño.

About halfway through the potatoes cooking, start heating a small skillet with olive oil for the onions and jalapeños. If you’ve been following the blog, you know how much I love flavored olive oils. I used Olive Amelia’s Chipotle flavored, mixed with Mushroom & Sage. They crackled nicely and smelled exactly like the fajita vegetables at a Mexican restaurant that come out on a super hot skillet.

When the potatoes are done, mash them and gradually add milk, softened butter, Himalayan salt, and garlic powder. Hand whip with a whisk, then add the sauteed diced jalapeños and onions. From there, keep mashing until your heart’s content. I prefer smoother mashed potatoes while Troy likes chunky, so I mashed mine until it was a mix between the two.

While those simmer, start slicing the zucchini into round pieces. My zucchini was on the smaller side, so I only needed to grab a round pan as opposed to a full baking sheet. I drizzled rosemary and garlic flavored olive oil into the pan, tossed in the zucchini, added a touch more olive oil then mixed it all together while sprinkling in the breadcrumbs. Typically I mix my breadcrumbs with salt, pepper, garlic powder, onion powder, paprika, and Parmesan cheese (if I have it) and occasionally herbs (basil or oregano). Bake the zucchini for about 20 minutes, or however long it takes for them to become golden and crunchy.

As the zucchini cooks, begin warming a cast iron pan with butter, garlic olive oil, two sliced garlic cloves, and sriracha. As that sauce becomes hot, add in the remaining onion (sliced) and sear the marinated pork tenderloin with everything. Slice the lemon in half, squeeze the juice over the pork and onions, and toss in both lemon halves near the pork and cover. I absolutely love adding lemon halves to dishes, ever since I watched the way Gordon Ramsay does it. If you’d like, transfer it to the oven. I did, but mine only took about seven minutes to fully cook after searing it on the stove top. At that point, you may as well finish it off on the stove.

Once it’s ready, spoon the onions and sriracha sauce over the pork tenderloin then let it rest. After this meal, I’m definitely going to add more variations to my mashed potatoes. Now, enjoy! 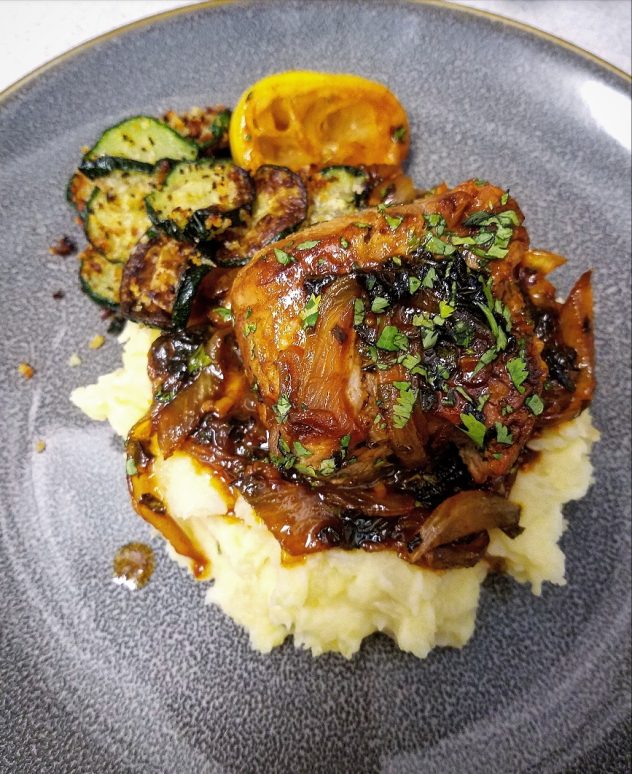