If you follow me on Instagram, you might have seen my post about roasting artichokes. I’ve never known what to do with a whole artichoke, which is why I subsequently end up buying jars of artichoke hearts. The idea often intimidated me and I’ve assumed they are a lot of work. Oh my gosh, I couldn’t have been more wrong. With my newfound desire to try different produce and my goal of healthy eating in 2019, I decided to roast a whole artichoke. Plenty of results show up for oven roasted artichokes, so I perused a few sites for the general idea of how to do this and got started.

First, I read a lot of recipes that call for cutting them in half, then roasting. I can’t tell you why, but I really wanted to leave them whole. I finally watched this video:

Perfect! This is incredibly easy and can serve as your main dish or a healthy midday snack. Once you cut into the artichoke, you’ll notice the beautiful layers upon layers of leaves. I started by using my fingers to stretch these out in order to create more space for the seasonings. If you’ve read other recipes of mine, you know that I’m a garlic lover, so I had to stick some cloves in here. I think roasted garlic is absolutely delicious; I add it to steaks whenever possible. The consistency of roasted cloves stuffed in the artichoke perfectly matches that of the leaves, and you can’t beat those flavors together.

Not only had I never cooked an artichoke, but I had no idea how to eat it either. When I discovered you basically suck the bottom of the leaves, I was even more intrigued. I love, love, love interactive eating! Is that a thing? I think that’s the best way to describe it? I suppose all eating is interactive, but I mean I love enjoying a dish that has its own process. Troy, not so much. He wasn’t the biggest fan of these because it was “too much work.” Pshhh. Eye-roll. I don’t see how picking a leaf off and biting it is a lot of work, but to each their own.

Another benefit of making this? Minor clean-up! 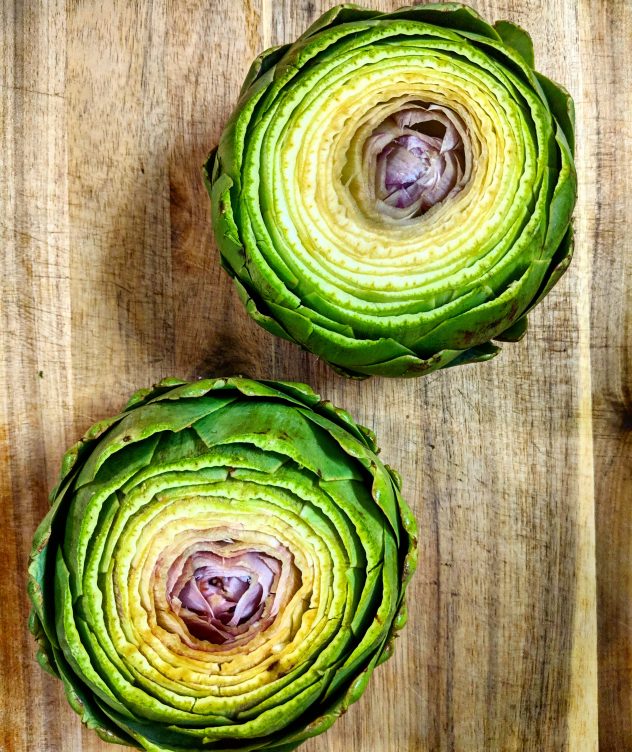 Ready for the easiest meal you’ve made? Set the oven to 425°

Start by cutting off the stem and about an inch off the top. Then, use a baking sheet or a square baking dish. I used a baking dish because I liked the idea of the higher sides keeping a tad more heat in. Who knows if it actually helps, but my dish looks prettier too, so there’s that.

I go between dressing the artichokes on my cutting board, or directly in the baking dish. I’m starting to do it directly in the dish because there’s so much less cleanup. Literally one thing and that’s it. Start by separating the leaves, like I mentioned earlier. This will give you more room to stuff the garlic cloves and ensure the olive oil and lemon juice get down inside. Drizzle the outside with a healthy amount of oil – same for the inside. I like using a pourer/spout/topper on my olive oil, as it lends to a more controlled pour. You’ll save so much oil and avoid dumping too much on. Then, I usually take a silicone basting brush and go around the entire artichoke.

Once you’re satisfied with the amount of olive oil covering the in- and outside of the artichoke, dress it with lemon juice. For this part, I mainly focus on putting the lemon juice inside and between the leaves as opposed to the outside. Next, season with coarse sea salt and pepper. Again, it’s all about completely covering all around it. Smash garlic cloves with a knife and peel the skin off. Sometimes I cut them in half, just to give me a few smaller pieces to insert all around. In the ingredients I say 1-2, but I probably used three. Again, garlic fanatic here.

I read some recipes that also topped these with fresh herbs, like rosemary, and cheese. I tried cheese the first time, and it was fine, but honestly I can do without it. Trust me, I don’t come to that conclusion often so this is a big step for me. I also used rosemary the first time. Again, I liked it but I’ve found that I prefer artichokes in the most simplest form possible. Get creative here and stuff/add/drizzle whatever your heart desires! Don’t forget to share your creations using my hashtag, #MyStyleFoods. Wink, wink.

Once you’re ready to roast, wrap them in aluminum foil. Everything you read says heavy duty. I read some recipes that seriously emphasize this, but I had normal foil and it was perfectly fine. Make sure to double wrap it and don’t leave any openings. The first time the bottom of mine were a bit open — the dressing will drip out and it started burning in my pan. Based on the smell, I thought I burned these somehow. Everything was fine; I had to wrap another layer around them so they were completely covered then I just stuck it back in.

The meat on the leaves is incredibly tender and as you near the end, the artichoke heart is simply to die for. The consistency really reminds me of avocados. Some people cut them in half to scoop out the little hairy things on the inside. I think they are easy to avoid, so I ignore this and just roast them completely whole.

To be completely transparent, the artichoke above is a tad darker than it should be. I hadn’t noticed at first, but when I roasted this one it wasn’t the freshest; I think it was on its way out. Once I started eating it, I knew immediately because the meat wasn’t nearly as tender. I forgot to snap a picture of the final product the first time I made them, when they were definitely not going bad. However, you get the idea!

The first time I made these, I followed a recipe that used ketchup and mayonnaise with a touch of lemon juice as the dipping sauce. I can’t find the link; if I do I’ll update this post with it. Surprisingly, I thought it sounded gross at first but it really wasn’t bad. The second time I made them, I decided to pair it with a mayonnaise and Sriracha mix instead. Now this I much preferred. Sriracha adds just the perfect amount of spice for my palate, and it doesn’t burn the same way hot peppers do. I think this dip is more flavorful than the ketchup version, and it tastes as though you really spent some time on it. If you want something tangy and mild, go with ketchup. If you want a little bit more of a “kick” go with Sriracha.

It’s as easy as mixing all these together. I don’t measure anything, I simply use a spoon and squirt the sauce in. The most important thing is to taste, taste, taste! I recommend starting with the above measurements, then adjust to your liking. You could even try adding a little bit of minced garlic or fresh herbs.

Health benefits
Artichokes are packed full of nutrients and fiber. In fact, they have about half of the recommended daily fiber for women (a third for men) and can help with inflammation. Filled with antioxidants, they help prevent cholesterol  formation and are one of the most antioxidant-rich of all vegetables. To top it off, they can lower blood pressure.

I know mayonnaise isn’t the healthiest choice for the dipping sauce; I’m starting to look for ingredients that can replace it. I think yogurt is a viable option, so I may be trying that next time I have artichokes. Please share your recommendations!

Next time you’re having company, use these beautiful little thistles (yes, artichokes are considered a thistle!) to provide a super easy, healthy appetizer and a gorgeous display! You’ll look like an experienced chef, when in reality it takes not even 10 minutes to prep these guys. They are now my go-to for lunch and they make a deliciously simple dinner when paired with soup.