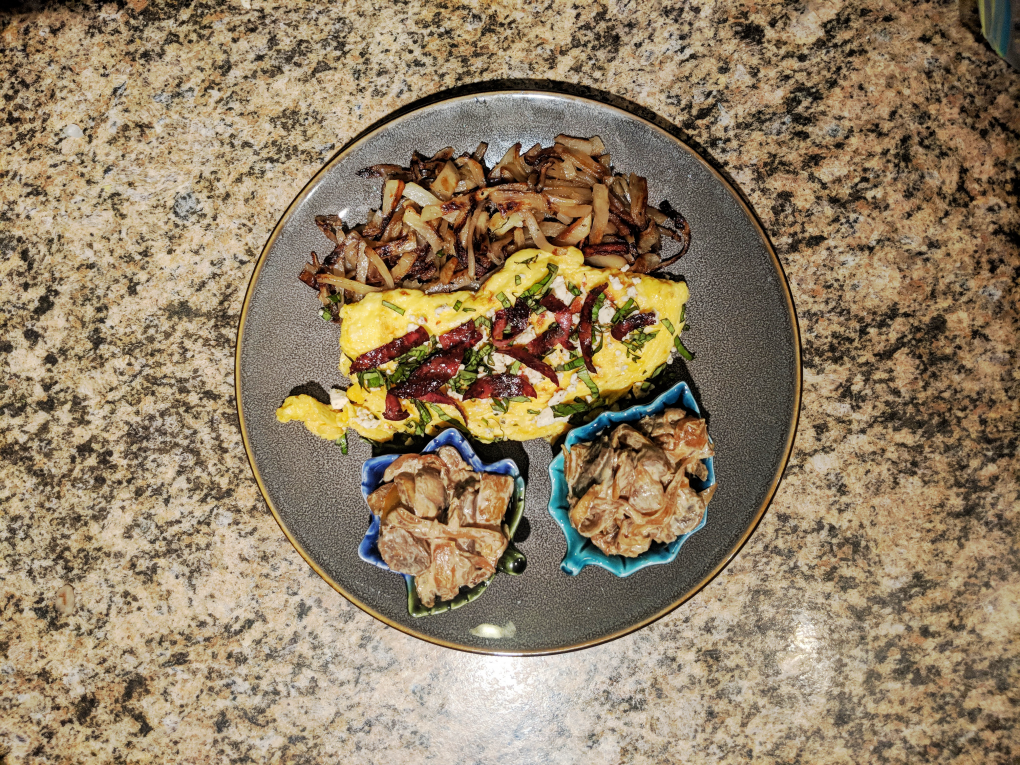 Sometimes I wish for nothing more than a rainy Sunday morning where I wake up to my fan gently whirring in the background. Occasionally, I crave those overcast days that give the room a blue-gray hue, and the pillows are just right. They’re perfect days to slightly sleep in before starting breakfast — perhaps a cheese omelette?

I’m thrilled to say, today was one of those Sundays. And yes, I made a cheese omelette for breakfast; note, a completely spur-of-the-moment decision. I had potatoes and onions I needed to use, and I decided a few days ago that I wanted to try making Hash browns. Unfortunately, my cheese grater cut the potatoes too finely, so I switched to making skinny breakfast fries. Note to self, get a block grater.

Going into this meal, I definitely thought I’d be cooking scrambled eggs. For some reason, as soon as I poured my mixture into the pan I changed course and decided to try an omelette. Mind you, I’ve never made one before; for some bizarre reason I like to think that I don’t like omelettes. I guarantee you, though, that as soon as I start making them more, I’ll fall in love. I grew up eating them, and the stuffings are so versatile, why have I waited so long to do this?! Here’s how I went about making my first cheese omelette:

Take a few pieces of salami and cut into thin strips. Ham, pancetta, or bacon are other options. Heat a small skillet, then add salami strips. Cook until crunchy. Save the grease for cooking the scrambled eggs.

Using a fork, scramble two eggs in a small bowl. Whisk your wrist swiftly to achieve a smooth liquid. Add a splash of milk or cream and whisk again. Make sure your skillet is hot, and add aa ver small amount of butter to the greased pan. Pour in scrambled eggs, and cook until the bottom begins to bubble.

A silicon spatula is the best tool for scraping the sides of an omelette. Run this around the sides a few times as the bottom of the eggs cook. Sprinkle shredded cheese on one half of the omelette. In honor of my blog’s namesake, add however much or little you’d like! Fold the omelette, then flip to seal together. I cooked my omelette until the outside had a few brown marks. 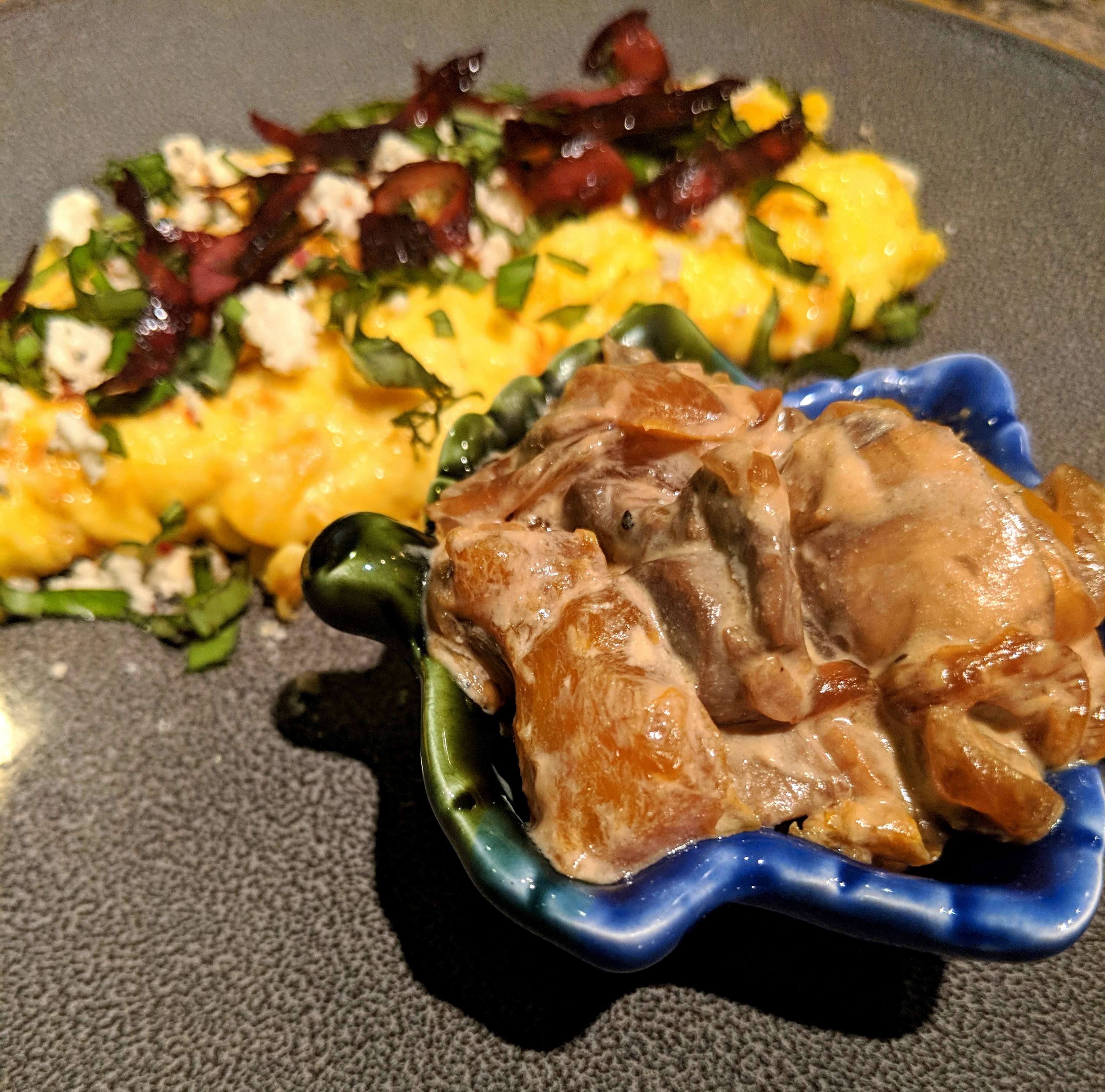 Heat a large skillet, then add olive oil. Slice yellow onion and bell pepper. In a medium bowl, lightly season with sea salt. Set aside, then roughly chop garlic cloves. Once the oil is hot – it will move smoothly in the pan, like water – add garlic. Let these barely start to brown before adding sliced yellow onion and yellow bell pepper.

Next, wash and slice the mushrooms. Throw into a small bowl and douse in soy sauce and Worcestershire sauce. Stir for even coating. Before adding all mushrooms, make sure your onions have a brown crust on them. Picture fajita style. Create a hole in the center of the onions and pepper, then pour in some of the soy and Worcestershire sauce mix. Allow that to flash-simmer and stir. Finally, add mushrooms.

Cook until all vegetables are soft. For the sauce, we want liquid, but I had way too much so I poured some out. Don’t feel bad if you have to do the same! Reduce, then add a dollop of sour cream to the pan. Stir to create a sauce.

Rinse and peel two large Russet potatoes. Slice them lengthwise, then pile those pieces in a stack. Again, cut lengthwise to create small skinny fries. I then cut those fries in half so they were shorter. Have a hot pan ready and coat the bottom with olive oil. If you’d like, add a small amount of butter. I didn’t do this, but it wouldn’t hurt! In a large bowl, season the potatoes with salt and pepper. Add in the potatoes and cook until crispy, golden brown.

I attempted to flip these in one turn, but I was far from successful. I’m still practicing my pan flipping skills. For this side, keep in mind that potatoes are so incredibly easy to season, so don’t be shy with what you add. I was in the mood to keep it simple, however, a little paprika can do wonders.

Top with feta, basil, and crispy strips of salami.

There’s nothing like the satisfaction of a productive week. Especially when it involves a visit from my sister and days filled with wedding planning! Here’s a scene to give you a glimpse into the way my sister and I discuss all matrimonial matters: Emily and I stand huddled over our shopping cart. Quickly and beautifully, she sketches the venue while glancing between her journal and the VR photo on my phone. As I watch her, we rapidly and animatedly brainstorm ways to decorate the space all while vowing to leave to get coffee “soon.”

Naturally, a great breakfast must close-out a great week and let me tell you, this is the perfect weekend morning breakfast. This cheese omelette is quick and simple, and the creamy vegetables and fries help diversify the dish’s flavors. Tell me what you used!

With this recipe, also try…