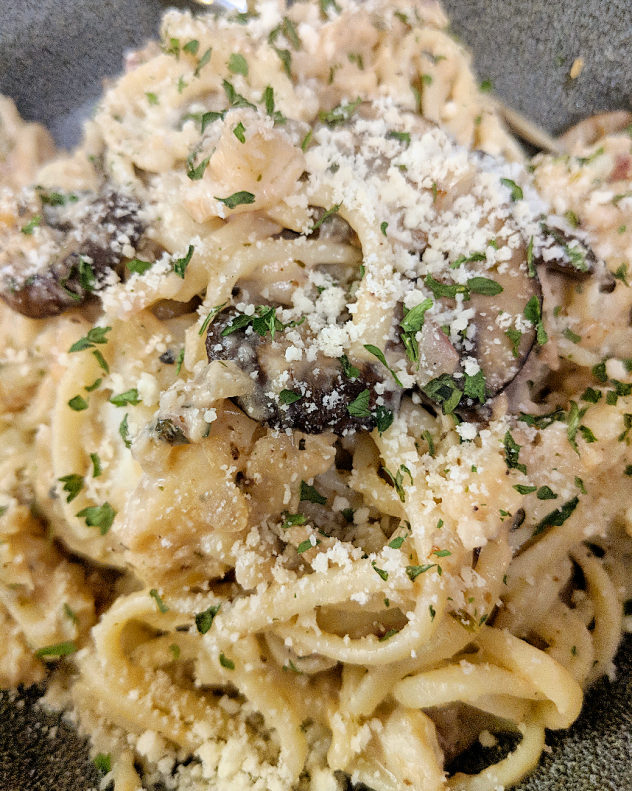 Wow, it’s been awhile! Between a trip to California, preparing to move, and the constant applying-to-jobs, I’ve severely neglected MyStyle. This pains me, and I’m certainly trying to change this. I went through a phase of cooking pretty boring things just for ease, so I lost my blogging groove. Good news, it’s coming back! Hopefully I’ll have some catch-up posts soon. Getting back on schedule, here’s my Lemon Parmesan Linguine with Cod.

A few posts ago I mentioned Troy’s new open-mindedness toward fish. Scoreee. I’m jumping on this beautiful development, so I promptly bought pieces of Alaskan cod.  It’s one of the first fishes I tried growing up and I don’t find its taste very fishy. People describe it as sweet, and I love the way the pieces flake off once cooked. I have high hopes for tonight’s dinner.

I’m using linguine, but obviously any pasta will do. However, I think a long pasta like spaghetti, fettuccine, or linguine works best with this type of dish. There’s something comforting about digging into a creamy mess of pasta and twisting until you get the perfect forkful. Start a pot boiling water for the pasta and, as always, start preheating your skillet.

Did you know? You can make garlic paste with just garlic cloves, salt, and a knife. Yes! It’s that simple. Thank you, Beat Bobby Flay, for this fantastic little tidbit. I decided to test it out with this dish. I definitely need some more practice; while it worked, I think it could’ve been a little smoother. I just became a little impatient. Still, give it a try! All you have to do is mince your garlic, sprinkle salt over it, then use your knife to mash and smear it across the board. I set my sea salt grinder to fairly coarse since this will help mash the pieces and draw moisture from them.

So, start out by making the garlic paste. One of my garlic bulbs started going bad, so I salvaged the remaining cloves for the paste. This was about six of them. Now, I know that’s a lot of garlic, but I want it to be noticeable in my sauce. Finely chop red and yellow onion; my measurements come from leftovers I had, so I mixed the two. At first I was hesitant, but it turns out the combo gave the sauce another layer of flavor.

Once you’re prepped, grab a small bowl for the fish. Rinse it under cold water then season with salt and pepper. Next, drizzle olive oil over the pieces to coat them so the spices stick. I wanted to keep it light, so I just used basil, parsley, rosemary, and red pepper flakes. Splash with lemon juice and mix so all the pieces are covered. If you’d like, add more seasoning to your tastes. Slice 1-2 cloves of garlic to cook with the fish.

Drizzle a little olive oil in your skillet – I used the same flavors as I did for the fish – and add garlic. You won’t need too much since the fish is already coated. Dump in the cod pieces and let them cook until golden brown. Probably around three minutes per side, maybe five. Once done, remove them from the pan and start the sauce.

Pasta sauce
Keep your skillet hot and add in the garlic paste, then the chopped onion mix. Let those get translucent, then add mushrooms. I loveeee cooking mushrooms because you basically can’t mess them up. Season with salt. Once you’re satisfied with the color on everything, add chicken broth; my container was basically out and I would’ve liked a bit more, but unfortunately I didn’t have much. I would suggest half a cup. Add two cups of milk, lemon juice, a bit of lime juice, and let that simmer for two minutes. 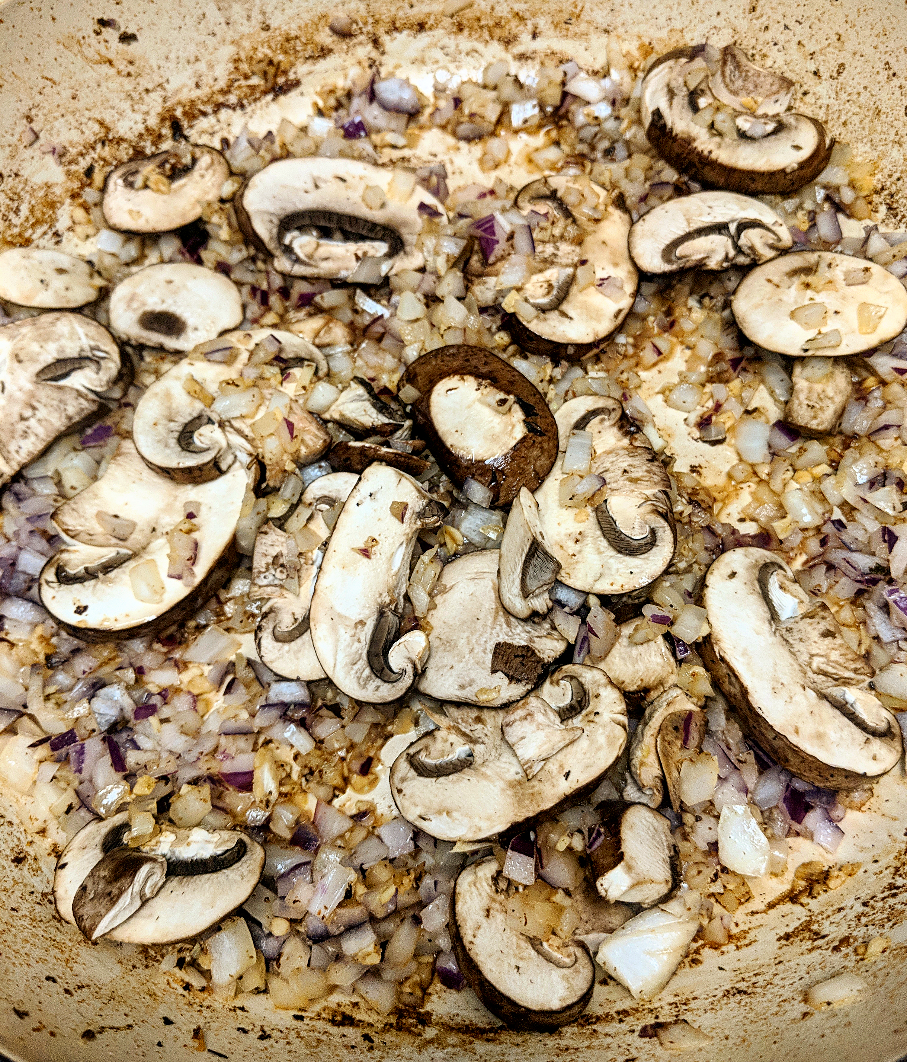 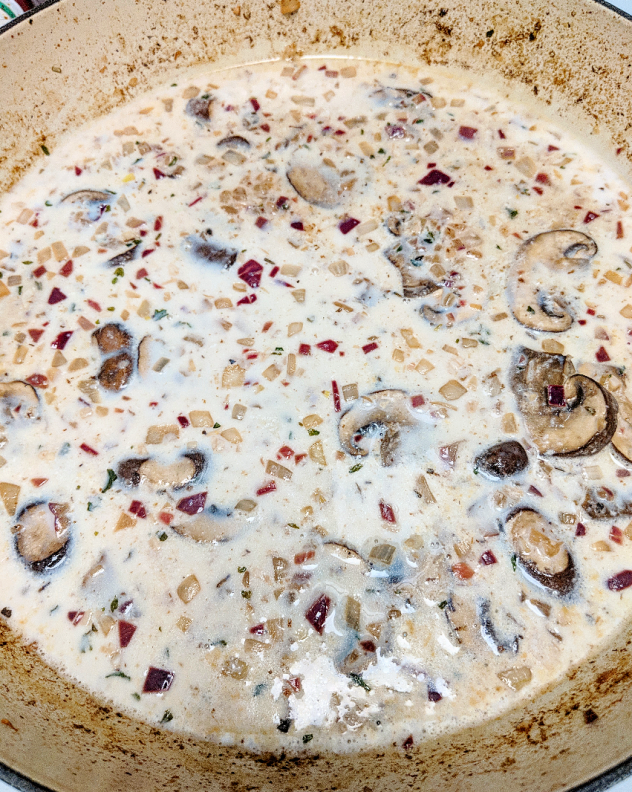 At this point you’ll notice that it’s fairly thin. To thicken, add flour and Parmesan. Again, mimic the flavors of the fish and season with lots of basil, parsley, oregano, and a bit of red pepper flakes. I also added some chili powder, but I promise this wasn’t spicy at all. Keep adding cheese and/or flour until it’s a nice consistency for pasta sauce. Add the cod back in.

Before you drain your linguine, save 1/2 cup to 1 cup of pasta water! The starch in the pasta water will help your sauce bind to the pasta and make it oh, so lovely.

Thoroughly mix, plate, and garnish with parsley and Parmesan. Enjoy!

Let me know what you think by using #MyStyleFoods!