Okay, so my first-ever attempt at making cauliflower flatbread was pretty bad. It turned into a cauliflower crumble instead. In my quest for making healthier choices, I decided to try a grilled chicken flatbread, using cauliflower.

Per MyStyle (ayy! See the usefulness of the namesake?), I made this without much preparation beforehand since I had cauliflower in the fridge. Most recipes call for some sort of cheese in the dough. Definitely add this if you’re going for that flavor, but mine turned out really great even without cheese. I worried it would be too bland; just season it well enough and everything will be fine. The original plan: top the cauliflower flatbread with spinach pesto, sautéed vegetables, and grilled chicken. Below is what actually happened: 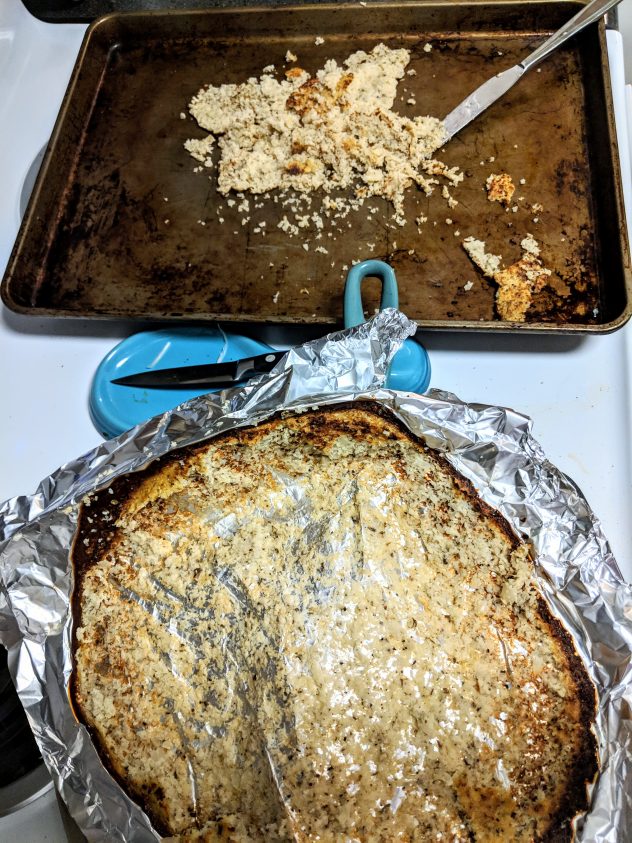 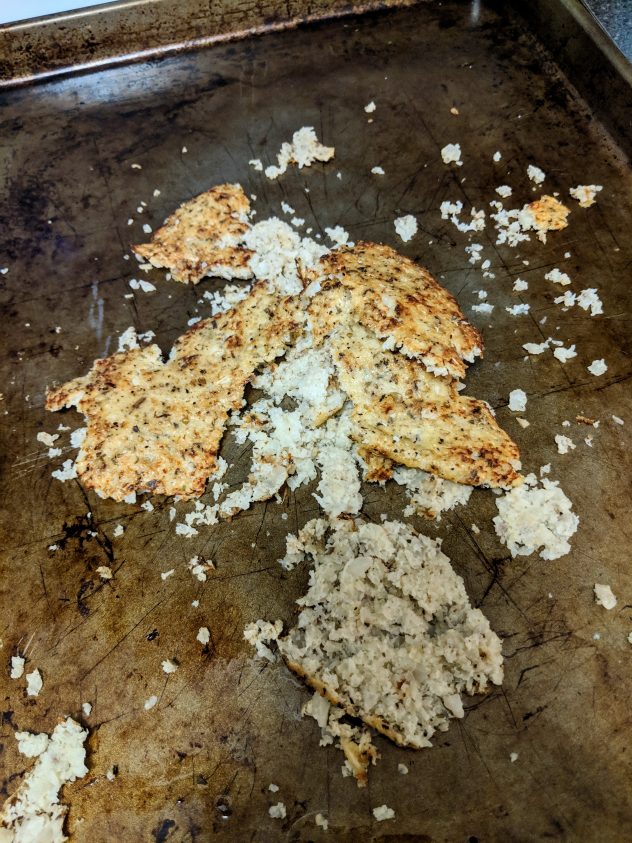 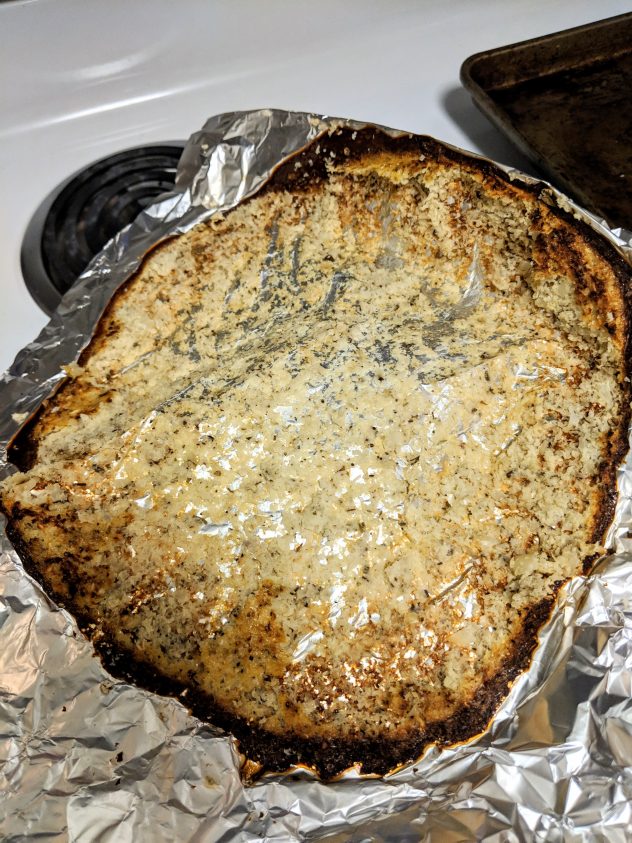 What went wrong? First, I didn’t have any cheesecloth. Every recipe calls for squeezing the cauliflower rice to extract as much water as possible. Even with my lack of cheesecloth, I ended up using a dishtowel to get some water out. This helped keep it crunchy and dry, but the texture will be on point when I get the right tools. Second, I didn’t have any wax/parchment paper. I used foil on my baking sheet instead, and it would’ve been totally fine had I remembered to put olive oil or cooking spray on it. Gah!

I didn’t follow one recipe exactly for the cauliflower. If you’ve read other posts of mine, you’ll know this is how I operate. I enjoy reading a bunch of recipes before I get started, then I do my own thing based on other recommendations.

Start by setting the oven to 400° and cutting or pulling off the cauliflower florets. To make this into cauliflower rice, pulse them in a food processor until light and fluffy. You can definitely use a kitchen grater; it will be messier and take longer, but if you’re in a pinch you can still do this. I tried it to see what it was like – it got really tiresome really quickly for me. Food processor it is.

Once you’ve created the light, fluffy “dough” transfer it to the cheesecloth. Twist and squeeeeeze as hard as possible. Keep squeezing until water doesn’t come out. One recipe said you could wring out about 1/4 cup of water; another suggested grabbing your husband for help. lol

After squeezing out the water, transfer the cauliflower to a bowl. I cracked one egg – which seemed to be plenty – and then really piled in the seasonings. I went heavier on black pepper and Italian seasoning, which is what helped make up for the lack of cheese. Don’t be scared to just go for it. However, don’t use too much salt; I think I slightly over salted a few pieces of this dish so once it came together it was a bit salty. Next time I’m leaving more out of the vegetables and chicken.

When you’re satisfied with whatever herbs and spices you’ve added, mix everything together. Transfer it the the backing sheet *with* wax paper. I’m wondering if a really well greased baking sheet would work on its own, sans parchment paper? If you want to play it safe then definitely use the paper.

Form it into a rectangle or circle, depending on if you want pizza or flatbread!

Place it in the oven and bake for about 15-20 minutes. I didn’t set a timer (ahh guys I’m working on getting more specific, I promise…) but I kept my eye on it. After that, flip it and cook for another 5 minutes or so. Be confident – if it looks like it’s browning and getting crust-like, trust your instinct!

Now that I’ve tried it once, I’m happy to report this is SO easy. Super, super easy and worth it for the healthier substitution. No worrying about anything rising, yeast, etc. I also love this recipe of mine because you can easily make it vegetarian – obviously, forgo the chicken and you’re set. 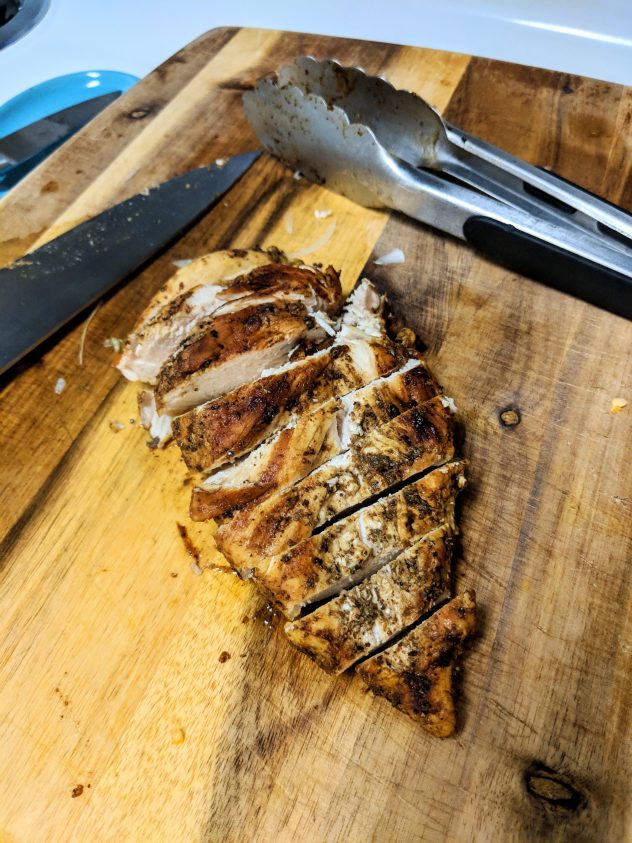 To prepare this, I rinsed my chicken breasts and put them in a small bowl. Next, season with salt, drizzle olive oil on all sides, crack pepper over it, and squirt in Dijon mustard. I used a touch of poultry seasoning, but the Dijon mustard and ground meat seasoning were the stars. It’s not really cooking if your hands don’t get messy at some point. So, get in there and mix it all with your hands!

The ground meat seasoning I linked to above is basically onions, garlic, sumac, parsley, salt, pepper, turmeric, and “other spices.” Sorry to be of no help with the “other spices” aspect. If you have sumac and turmeric, you’ll get the basic gist. I also love using Dijon mustard on chicken, especially when I’m cooking with high heat. To me, it gives it a beautiful color and amps up the flavor. It’s extra perfect for chicken with the skin on.

Start preheating a grill pan. I have a square Le Creuset grill/panini pan which worked perfectly. Preheating the pan is an important step I think a good amount of home cooks forget about. It’s so disheartening to see someone throw beautiful ingredients into a pan that then falls flat. Instead, set your pans to a low/medium heat as you prep other vegetables. This way, you hear the satisfying sizzle when you drop everything in!

Once your pan is hot, squeeze a little bit of lemon juice in (listen to that sizzle!!), drizzle olive oil and place the chicken down. Sear the chicken on each side and gaze at those luscious grill marks. Since the oven was already on, I threw the pan in there to finish cooking while I got the vegetables ready. Pour in a little bit of chicken broth to keep it from drying. Definitely keep track of time since it’s set to 400°. If you’d rather cook it in the pan the entire time, go for it.

For the vegetables, I followed the same seasoning steps as the chicken, minus the Dijon mustard, poultry- and ground meat seasoning. After slicing the onion, green bell pepper, and orange bell pepper, drizzle them with olive oil and season with everything minus the above mentioned. Remove the chicken from the pan and set it aside. Double check that your pan is hot because we’re cooking these fajita style. Again, squirt in lemon juice – I mainly do this to test how hot my pan is. If I’m not happy with the amount of steam, I let it heat up a little more.

Drop in the vegetables. If you’d like to use something other than a grill pan, feel free. I wanted less cleanup, so I used the same pan. Plus, they cook in the delicious chicken juices for extra flavor. I let these cook and stirred for about 2-3 minutes, then I turned up the heat again, just a touch, and added chicken broth. When it entered the pan it was still very hot, which created the steam I wanted. Cover with a lid so they get a bit softer.

Spinach Pesto
Spinach
Lettuce — not necessary, but I had some that was about to go bad
1/2 red onion, chopped into chunks
1-2 garlic cloves
Handful of pecans
Olive oil
Salt
Pepper

I think I’m going to do a separate post in more detail about this pesto. Maybe. Basically, combine everything in a food processor and pour in the olive oil as it mixes. Just like normal pesto! Continue until you’re happy with the consistency and flavors. I had made this the night before and just had it in my fridge; it was the perfect addition after randomly deciding to make a cauliflower flatbread.

The lettuce is in here because, while watching an episode of Beat Bobby Flay, someone started making this amazing looking sauce out of…lettuce? One of the judges expanded on this, saying her mother-in-law takes lettuce that isn’t really usable, and doesn’t look pretty, but it’s still totally edible, to make sauces. Blend it up with something else and voilà, a nice sauce!

Put it all together
So, hopefully when you’re making this, you avoid my mistakes. In that case, your cauliflower flatbread should be beautiful! Thankfully, it turns out I was really happy with mine, despite the fact that it wouldn’t come off the foil. The side that wasn’t stuck to the foil had a great brown crust, the flavor was strong but not overpowering, and even without cheesecloth it wasn’t soggy.

My idea was to take out a beautiful rectangle of cauliflower flatbread, spread the spinach pesto on it, top with the grilled vegetables and chicken, then pop it back in the oven for about 5 minutes. This would definitely be tastier with cheese sprinkled on top – feta? – and maybe sun-dried tomatoes.

Really, the possibilities are endless. 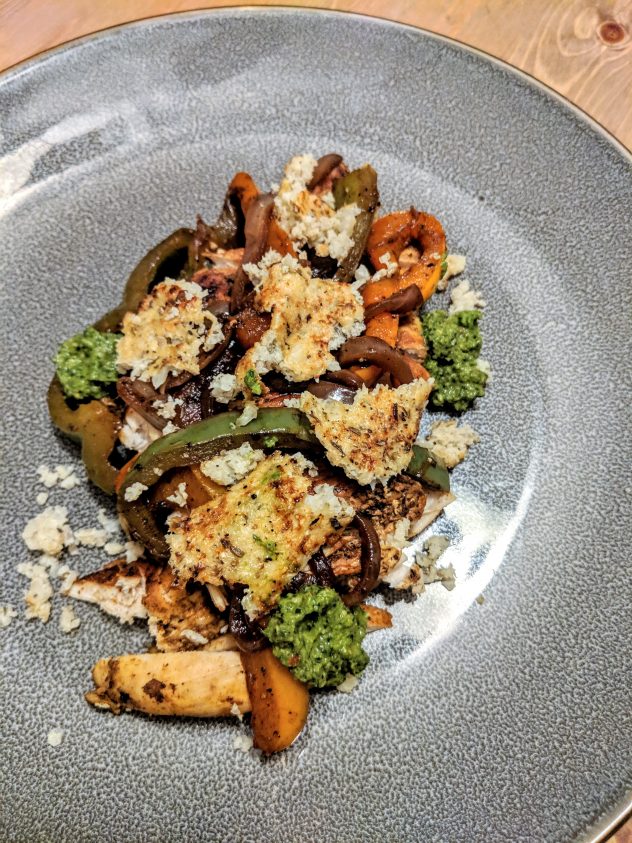 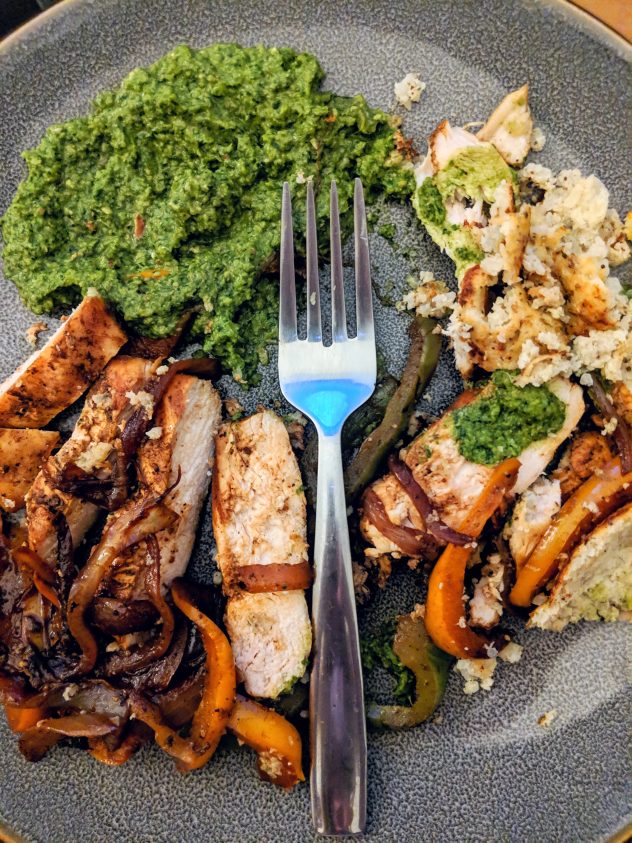