Last weekend we had gorgeous weather here in the district. Troy and I are preparing to move, so my dad showed up and gave us some much-needed help. It was a “first phase of moving” type of weekend, with food-filled activities packed in between. Friday night we headed to a chocolate making class with Chocotenango, founded by award-winning chocolatier Ismael Neggaz. We rounded out the evening with dinner at Teddy and the Bully Bar. (possibly one of my new favorite restaurants, largely based on their decor). But, the fun didn’t stop there. We spent Saturday afternoon outside, enjoying the glorious sunshine and walking the streets of Georgetown.

It’s cherry blossom season, meaning locals and tourists alike are looking forward to peak bloom. The city gets an invigorating burst of energy this time of year. People not only anticipate the warm weather, but the fresh onslaught of roaming tourists. We joined in on spirit of the season and went on a walking tour of Georgetown – a cupcake walking tour, mind you. So at least there were incentives along the way. 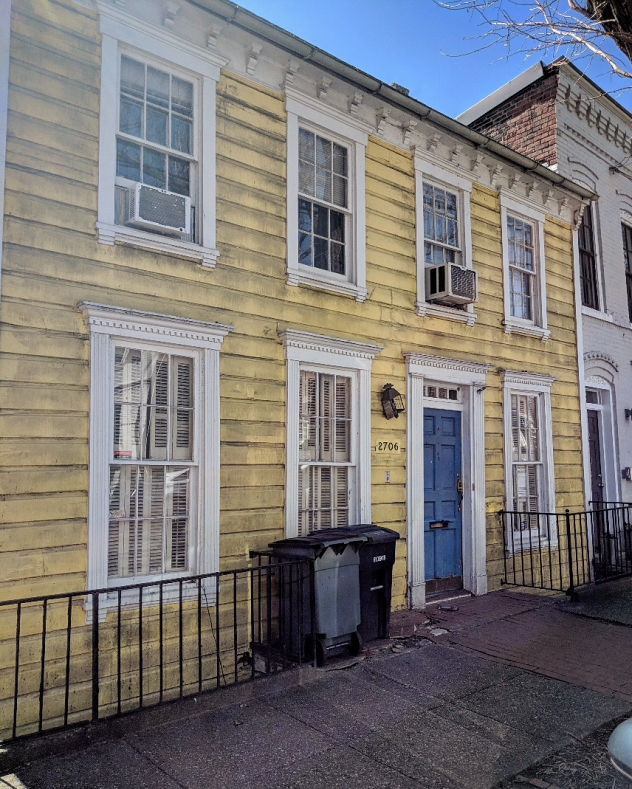 We began at the Dumbarton House, gathered in a quaint side yard next to a blossomed cherry tree. Our tour guide was a dapper man, sporting corduroy slacks, a vest, suit jacket, and panama hat. We walked down the street and arrived at a stately building called the Q Apartment. Further down, our tour guide pointed out an old call box. When I first moved to DC, I became fascinated with these structures dotting street corners. There were a few on campus, and I couldn’t figure out what they were. I finally learned that they are fire call boxes, first installed in the 1860s. The solid iron structures had a hammer attached to them so people could break the glass, pull down a lever, and send a telegraph to the fire department. Starting in 2000, the city implemented “Art on Call,” a city-wide movement to restore and paint the boxes.

Further along on the tour, we rounded a corner to be greeted by a run-down yellow house. The window trimmings still stood proud even though they once gleamed a brighter white. At one point, a former World War II spy occupied this home. Her name was Julia Child, famous television chef and author of Mastering the Art of French Cooking.  She has a fascinating story!

Sprinkles
Eventually the route led us to our first sweet treats, Sprinkles cupcakes. Sprinkles is right at the top of my list, landing neck and neck with Baked and Wired. Their seasonal cherry cupcake had the boldest flavors of the three we tried. I didn’t like this icing as much as my usual pick (vanilla with chocolate frosting), but the moist cake and hint of cherry made up for it. They have a small interior which is somehow very inviting despite its size. It has a whimsical feel about it, with just two tables tucked into the glass window-front. It’s the best idea to pick your flavors then stroll down to the waterfront to enjoy them. 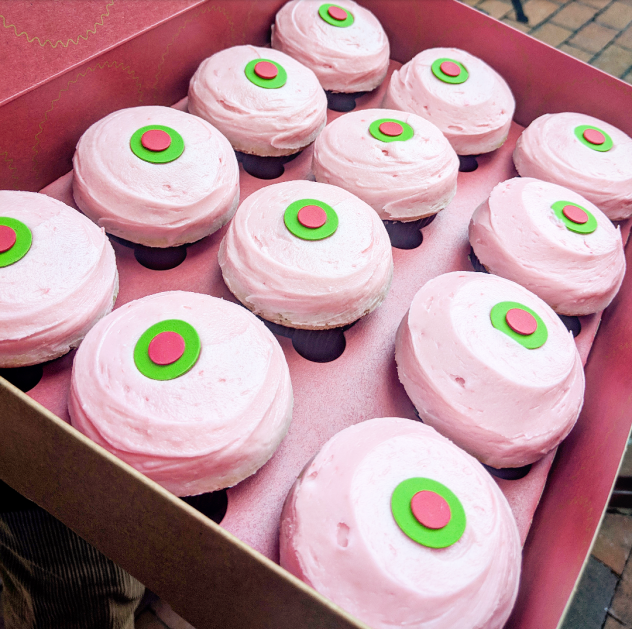 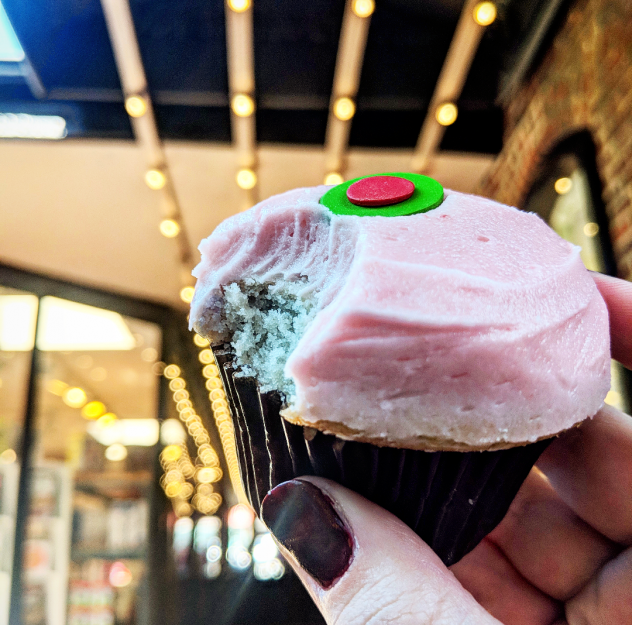 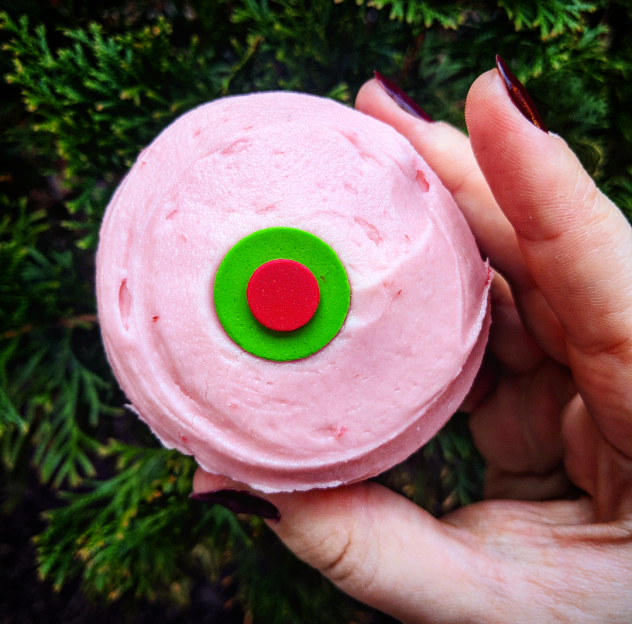 Georgetown Cupcake
Next stop: the famous Georgetown Cupcake. These gorgeous creations come from sisters Katherine Kallinis Berman and Sophie Kallinis LaMontagne. My absolute favorites are their Chocolate² and Chocolate Ganache. Now, I’ve had them a handful of times, but the lines are so long I usually avoid them. Plus, I think Baked and Wired or Sprinkles are far more worth it; you get larger cupcakes with more creative flavor combinations. With that being said, I did love the icing of Georgetown Cupcake’s Cherry Blossom cupcake. The cake part was spongey, with a silky smooth cherry infused cream cheese frosting resting on top. 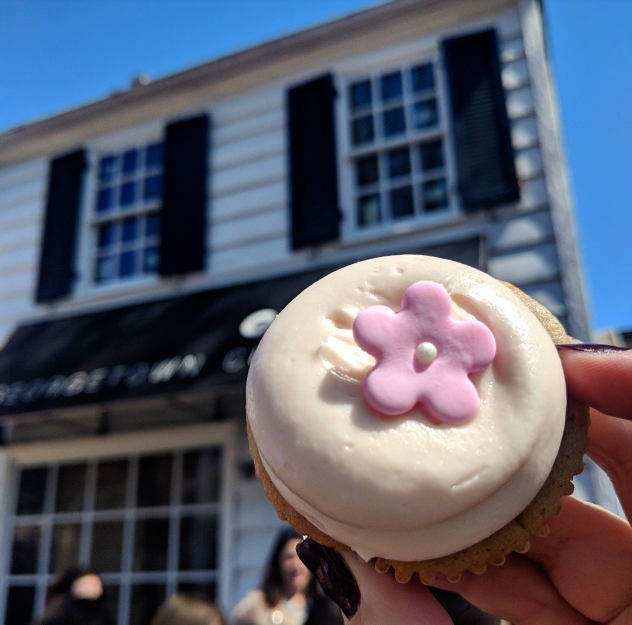 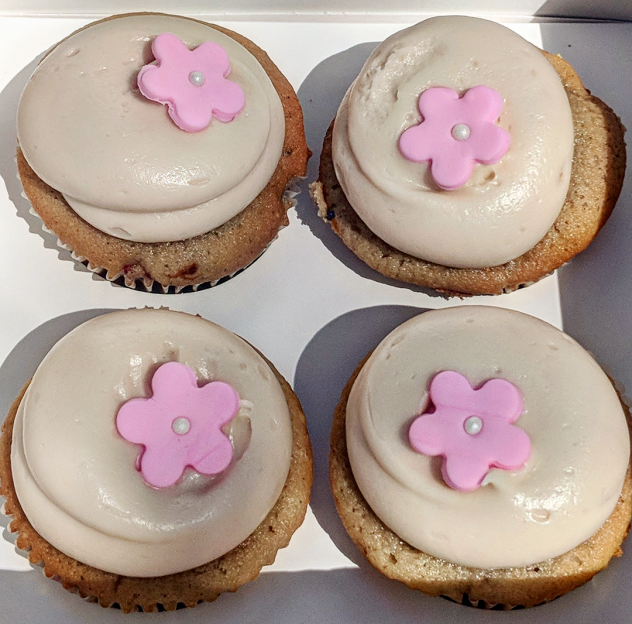 Baked and Wired
At Washington Harbor, we gawked at the condos which have seen tenants like Ted Lerner, Nancy Pelosi, and Malcolm Forbes. Just up the street is my favorite place to get a chai tea latte and occasionally pair it with one of their gigantic cupcakes. Unlike the first two, Baked and Wired has a decent seating area which usually fills up quickly over the weekend. It’s definitely the most hipster food spot in Georgetown. Their display is a treat in itself; “cakecups” sit perfectly underneath rows of glass lids, just begging to be lifted. I’ve fallen in love with flavors like the dirty chai, german chocolate, and pistachio.

After picking up the highly anticipated sweets, our tour guide led us to a spot next to the canal. Here, the group feasted on its final cupcake. Thankfully, we had snatched a box at the previous stop so the Georgetown Cupcake and Baked and Wired cupcakes were safely stashed for later. Baked and Wired’s Cherry Blossom cakecup was my winner for the day. Like I’ve said, I love its size and the cake was fantastic. With some bites, you’re pleasantly surprised with real pieces of Marischino cherries, chopped and folded into the batter. 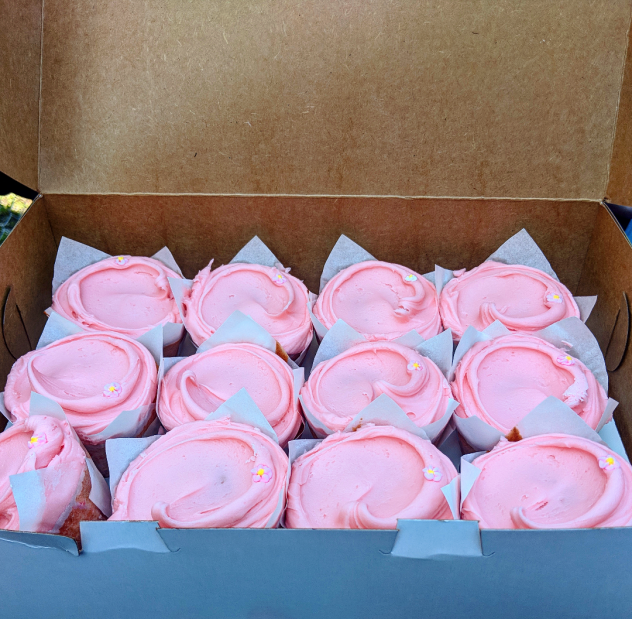 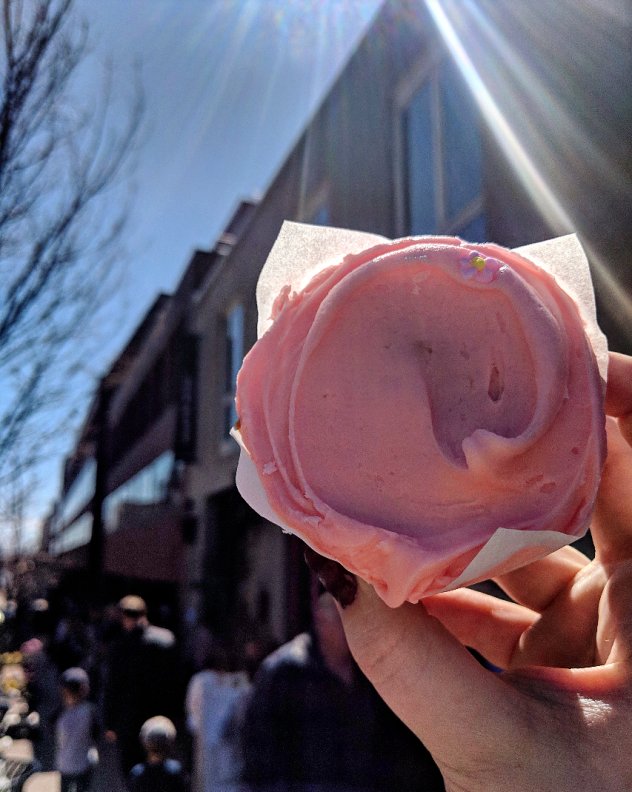 Whether you’re a local or you’re someone looking to plan a trip to DC, I highly recommend seeing if the Dumbarton House has any walking tours during your time here! It’s a relaxed setting compared to many other tours throughout the city and allows you to view the side streets of Georgetown with a historic lens.