So I’m calling this carrot and green pepper soup, but it’s more like a carrot soup with a bunch of vegetable sidekicks. My dad got me a hand blender/puree tool and I’ve been waiting to whip that baby out. This soup is actually the first time I’ve used it, and I think that’s because 1) it slightly intimidated me, and 2) I have no room to store it in my kitchen so the box had to go under the bed.

Today’s recipe is all my own; I read a few different carrot soup recipes to get an idea of what I wanted to do, but as usual, I kind of did my own thing on the fly. I didn’t see any that had more than onions and carrots, so I decided to add green pepper and mushrooms to see what would happen. Here’s what you’ll need:

Stock up on
4 garlic cloves
Bag of whole carrots
1-2 green peppers (I used one, but two might have been better)
1 onion (I used an onion and a half because I had half in the fridge that needed used)
Handful of mushrooms (literally – I just randomly threw these in so add more or less if you want!)
1/2 cup of milk
1/2 cup water (or a full cup of water/milk, whichever you prefer)
About 1/2 to 3/4 cup chicken broth
About a tablespoon of olive oil

To start, turn on one of your burners (if you have gas) and roast the green pepper on it. I let its skin become black in spots and kept turning it to get all sides. While that roasts, heat butter at the bottom of your soup pan or dutch oven and add the thinly sliced onions. While those become translucent and fragrant, toss in 4-5 peeled garlic cloves – you can leave them whole. I let these simmer for awhile, mostly because I was cleaning up around the apartment and listening to music…

Peel and chop the bag of carrots, then stir those in with the onions and garlic. This is when I added the liquids; milk, water, chicken broth, lemon juice, and olive oil. I used a little bit of regular olive oil mixed with a rosemary and mushroom flavored one.

At this point, I randomly decided to it needed to be a little meatier, hence the mushrooms! I put the measurement as “a handful” because I literally grabbed a handful and threw them in. Add in your spices and just keep tasting until it’s where you want it. 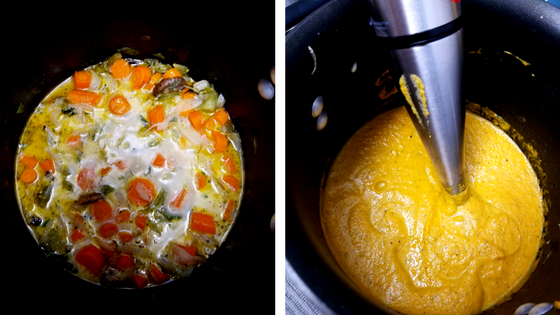 I had so much fun with this! It’s super versatile because you could leave it as a chunky broth soup or add sliced chicken to the top of the puree. I’ll definitely be pureeing more since it’s super easy and I like thick soups more than brothy ones. I’m so happy with the way this turned out. It was thick, hearty, and super flavorful. If you need a way to disguise vegetables for your kids (hey, or your partner) then try this! 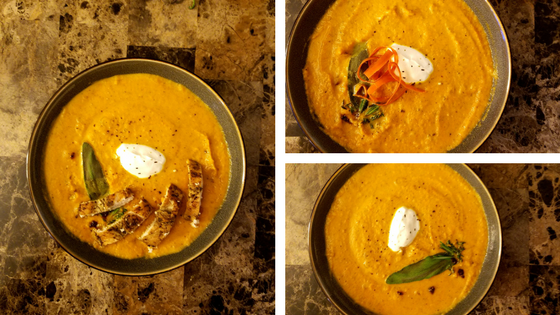