Young adults are constantly told how much they need to value this period in their lives. Millennials and Gen Z are warned of the dangers of social media and older generations declare that it’s corrupting our society. Well, people said the same about television at first and lo and behold, we’ve survived. I completely agree we need to value our youth, but social media has only ignited my drive to see more of what is “out there.” With the simple search of a hashtag we can glimpse into the life of another human — instantly! This spontaneity is one of the greatest experiences I’ve come to value in life.

I fell in love with cooking because you can make it your own, no matter your skill level. I’ve felt the most comfortable in my own kitchen, throwing flavors together and experimenting with the unconventional. Some people like to find a recipe and follow it, but I prefer to read five or more, then make my own. I love heading to the store without any dinner plan in mind. I can leisurely browse around, grab whatever looks good, then let those purchases guide me later.

After one particularly fun grocery run, I couldn’t wait to get dinner started. I picked up awesome vegetables and spices from my local farmer’s market, and halfway home I was already envisioning my marinade. I started by mixing some of Z&Z’s za’atar with my favorite flavored olive oils (garlic and rosemary), Himalayan salt, pepper, and garlic powder. Before adding the chicken, I threw in some mashed garlic and my aunt’s red pepper relish.

She started Rust Belt Pepper Company, a family-owned business which sells her Macedonian family relish recipe. Call me biased since it’s my aunt’s company, but I swear by this relish. It’s delicious! I’m wary of buying relishes and certain sauces from stores, because there’s nothing like the homemade version. Rust Belt is truly bringing the fresh, full flavors of a family tradition to your kitchen. My mom will restock me in D.C. every so often and it stores very easily, plus it’s so versatile. I’ve used it on crackers with feta, on grilled cheese, in my scrambled eggs, mixed with quinoa, and more. Check out their locations and see if they are somewhere near you!

Come see us tomorrow at @northunionfarmersmarket in Shaker Square! We only have 3 gallon jars left, so get ’em while you can!

Anyway, back to dinner. Before we get into it, here’s what you’ll need:

At first I had no idea what to do with the eggplant. Troy isn’t a huge fan, but I so want him to like it so I knew I needed something good. All of a sudden I was like, oh, duh! It’s difficult to find something gross that’s breaded, so what better way to introduce eggplant to him. I cranked my oven up to 350° and started the breading process.

As the chicken marinates, slice the eggplant in half and start carving out its interior. Set it off to the side, because you’ll be cooking that in the skillet along with the onions and spinach. Then, take an olive oil brush and quickly coat the entire thing. I purposefully left the skin on because I wanted it to be a solid siding for my breaded eggplant boat, but it would be interesting to try skinless, too. I mixed my Panko breadcrumbs with an Italian blend, even though I usually prefer Parmesan, and pepper. The rest of the process is the same as if you were frying them: egg bath, breadcrumbs, repeat, and place on baking sheet. I threw on two basil leaves in hopes of getting the essence in the eggplant. 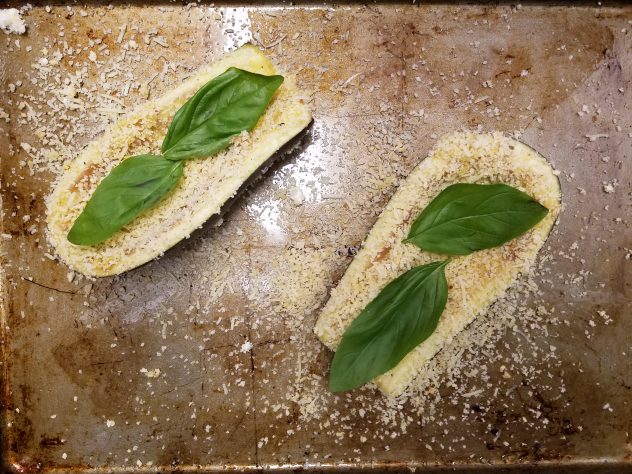 I know the ease of baking chicken, but there’s something about tending to it in a skillet that I much prefer. In order to have a thick, rich filling for my breaded eggplants, I cooked the chopped onions, eggplant interior, spinach, and chicken together. Start by cooking your onions until they are soft and translucent, add more garlic, a touch more red pepper relish, a splash of chicken broth to keep it juicy, and the spinach. Place the chicken on top of this mix and let it all cook together. If you’re in a hurry, just throw it all in the oven.

The breaded eggplants cooked for about 25 minutes, just check in on them and take them out when they look golden brown. Once you have the chicken cooking and the eggplants baking, sit back and wait!

I wanted a refreshing, cool note with this dish. As I waited for everything, I mixed some sour cream, chopped basil, chopped cilantro, lemon and lime juice, and a dash of olive oil together. Fill the eggplant boats with the eggplant interior, onion, spinach. Top with the chicken, sauce, cilantro, and a sprinkle of goat cheese. It came out just the way I wanted, and Troy even ate the majority of the eggplant. Success! It would be interesting to try this with zucchini, or squash without the breading.

This post was in no way sponsored by Z&Z or Rust Belt Pepper Company.